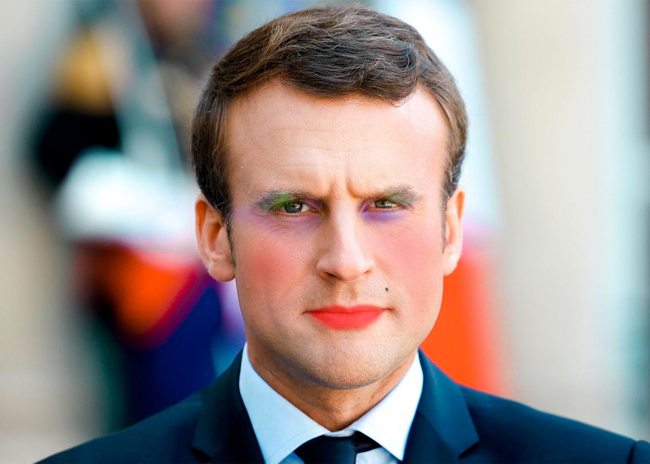 Emmanuel Macron, the current French President has been chastised for his penchant for beautification and the extraordinary bills to the French taxpayer this is causing.

Mr Macron’s office confirmed a report on his beauty spending published by French news magazine Le Point, but said it was nothing to do with the ‘peasant class’ therefore they should just ‘shut up and eat cake’.

“The President is awoken in the palace by numerous servants in the morning who bring him his daily newspaper, lightly ironed, of course, then a continental breakfast avec some extra bits we cannot divulge to le public. After the calves milk bath siphoned from the best herds in Normandy, servants will attend to Monsieur President’s toileting needs, this requires a staff of four persons, one to lift, one to hold, one to shake and the other to wipe. The makeup session requires four hours and the dressing of the president an additional hour. After this, the hairdresser, who is flown in from the South of France every day, enters the living quarters for a preliminary discussion on how the daily styling should go, after much discussion, and sometimes argument, a decision is made and the hairdresser begins the day’s work for approximately three hours. Et voila, after all of that, Le President is ready to go to work,” Macron’s personal palace courtier, Jean Pierre Quatorze, revealed to the French papers.

The report said costs included the pay for a freelance makeup artist for television appearances and trips abroad as well as an ecouterie of staff for menial jobs numbering in the thousands.

But it is not the first time the hair and makeup bill for a French head of state has raised eyebrows.

In 2016, it was reported that Macron’s predecessor Francois Hollande had a hairdresser on contract for €10,000 a month despite him hardly having any hair.

Mr Macron, 39, became France’s youngest ever president in May after beating far-right candidate Marine Le Pen in the country’s election.

With youth on his side, the reason behind his expensive makeup habit remains unclear.