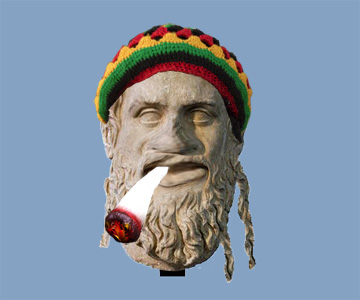 Plato and Kant are said to be the founding fathers of Western philosophy, whose ideas underpin civilised society.

But politically correct snowflake students at the University of London are demanding that figures such as Plato, Descartes and Immanuel Kant should be largely dropped from the curriculum because they are white.

School of Oriental and African Studies (SOAS)’s student union is insisting that when studying philosophy “the majority of philosophers on our courses” should be from Africa and Asia, “if the geezers had dreadlocks and smoked reefer it would be aight, innit!” said one of the students.

Another student opined: “The fact that while the likes of Plato were discussing highly evolved ideas about civilisation 2,500 years ago, illiterate Africans were still living in mud huts. Ancient Athens was a highly developed society, with remarkable architecture, utilising highly advanced concepts of philosophy and mathematics. Two thousand and five hundred years later, Africa is much the same, people still live in mud huts although now some own a mobile phone, no doubt dropped in by whitey.”

Unfortunately for the SOAS students, there were no African philosophers 2,500 years ago, and they have been searching for some evidence.

If it weren’t for that idiot who burned down the great library of Alexandria, which was actually created by Ptolemy, a Macedonian, there may be more answers, however much to the attrition of the students, they have come up stumped to find any black philosophers of the age. Blacks like to cite ancient Egypt as the cornerstone of African technology and civilisation, however it has been proven by many archaeologists and scientists that ancient Egyptians were Mediterranean Caucasoid and not sub-Saharan negroids.

Going far east, there is some light, where the students can find Confucius, whose lifetime nearly coincides with the ancient Greek philosophers, but finding anything in Sub-Saharan Africa will be a real task for the students.