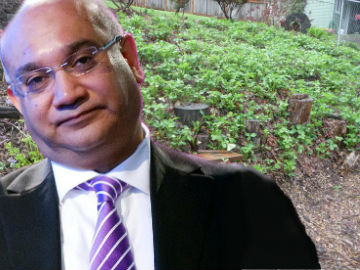 The much beleaguered politician is certainly no stranger to incidents in his faulty career, but this one has poked a rather large hole in the furrow, or should we say crater.

“Mr Vaz was caught with two young men uphill gardening. Much like the first early potatoes, Vaz was grafting with all his might with the two boys, pinching out a few tender perennials and planting his tuber in the mulch. In other words, he was caught fucking a few rent boys,” a member of the parliamentary commission revealed on Sunday.

Not that such a thing is a strange occurrence in parliament, but when the tabloids get a hold of this amount of manure, it really is game over, especially if you’re putting the charge onto expenses.

Now we know why Keith Vaz was so eager to meet those young Romanian men at the airport.

As for the Labour party, a mess is a mess, so there’s no change there then.