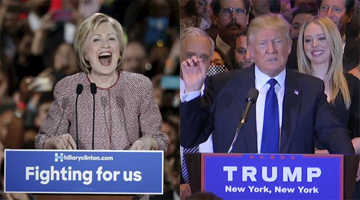 The people saw through that debacle and handed Trump New York on a silver platter.

Hillary Clinton is clearly the winner over Bernie Sanders in the democrat circle, and her campaign has been one of class, as opposed to Trump’s brutish vulgarity which has become his calling card.

To get the 1237 needed by July by Trump should be no problem, however GOP may still have some dirty tricks up their sleeves, and there is a chance they may still derail the Trumpster.

Ideally, the resultant contest should involve Clinton and Trump, a showdown that would bring an explosive finale to the final death knell of the Republican party.