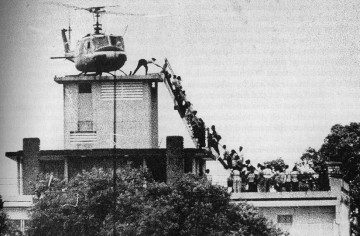 According to reports on the ground Al Sadr and his Shiite militia men are on the march once again, this time to the U.S. embassy in Baghdad’s heavily fortified Green Zone.

This ominous Baghdad Spring can only mean one thing, the Shiite militias want to turf America out once and for all and are taking the reigns from the subordinate Shia Vichy government put in place by the U.S.

Already, ISIS has made many in-roads towards Baghdad and are within 50 kms of the city. These facts are not reported by the mainstream media too pre-occupied with election reporting to care, but the augurs do not fare well for Baghdad’s residents whether in the Green Zone or not.

If Baghdad falls to either faction, the Obama administration would not only have lost most of Iraq but half of Ukraine as well. Obama’s intransigence towards his own military has definitely not paid off, as America loses all the gains it made globally, and more.

Soon we may see the same scenes the world witnessed in Saigon as Hueys lifted off every few minutes from the U.S. embassy as the Vietcong ambled their way through the streets calmly and with little resistance.