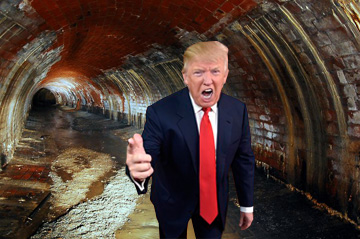 “Disabled people, I call them retards. What are they there for? When I’m prez we’ll just give ’em a pill, put them into a sleep — permanently!” Trump told another whooping audience whilst waving his arms around imitating a mentally handicapped person.

The crowd’s cheering rose to a crescendo as the Trump moved onto Muslims.

“If I see one, I get my bodyguard to shoot it. Hey, it’s that simple. I don’t care, woman, man, child, whatever. We need to kill ’em all like we did to the Injuns.”

As for Chinese people, the Don suddenly squinted his eyes and started talking like Fu Manchu.

Trump’s vitriolic hatred did not end there though, he saved his worst for the last.

“Jeez, I hate Sp*cks worse than anything else. Greasers, comin’ over here and their stank food makes you fart. The other night I ate a burrito, I was farting like a cowboy round the fire. They smell, they’re ugly and when I’m president I’m sending them all back to Mexico. Fuck ’em! They ain’t done nothing for this country apart from stink the joint up!”

“N*ggers are okay though, they got that musical thang going on. They’re a very musical people. One boy, he was shining my shoe the other day, you know spit shine, I gave him a fifty cent tip. Wow. He was so happy just for that. Not bad for a 65 year old negro. Sure they’re dumb as shit, but so are women. Never trust anything that bleeds once a month and still lives after that. I just use them, don’t get me wrong I cherish women, as long as they’re on their backs gettin’ fucked!”