The decidedly odd video details Barney’s quest to become a Middle East Peace Envoy, as George and Laura Bush pontificate on the beauty and
importance of American military might in the Middle East – and carpet bombing civilians to death.

Meanwhile, Barney is free to pursue what appears to be rapidly becoming an obsession for the small poodle – to achieve his dream of becoming a Middle East Peace Envoy and receive $500,000 per speech.

First, Barney must finish the mammoth job of decorating the
White House for Christmas.

He completes the job in record time by dropping a soppy steaming green turd under the Christmas tree.

Later in the video, Barney is seen dreaming of his master with a funny thought bubble over his head.

There’s nothing
like a canine’s dream sequence on the importance of Middle East Peace
Envoys featuring George W Bush to get you into a festive mood.

The low tech style of the video makes for hilarious viewing. 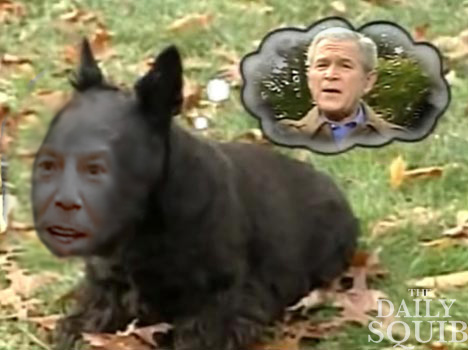 Barney dreaming of his master

George W Bush’s long suffering wife, Laura, is also seen trying to pry Barney away from the President’s bottom but is unsuccessful and Barney gets a good sniff.

The close of the fun White House video has Barney humping the President’s leg leaving a large white stain. The background music of “I’m dreaming of a White Christmas” is very apt.

Dear Refugees: Do Not Bother Travelling to the UK Any More...

Welcome to Hell On Earth

ABOUT US
The Daily Squib is a curious satirical parody newspaper offering breaking news, political satire, comedy, opinion and celebrity news.
Contact us: editorial (at) dailysquib.co.uk
FOLLOW US
© Copyright 2020 dailysquib.co.uk | All Rights Reserved
!