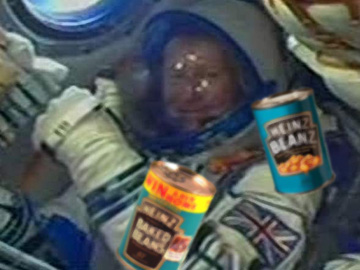 “The Russians have their vodka and cabbage, I’ve got a nice box of baked beans which I will cook up. I can’t wait to fart my way around the space station,” ‘Major Tim’ Peake told the BBC just before embarking on the journey.

After taking off in the Soyuz FG rocket at 11.03am UK time from the Baikonur Cosmodrome, Kazakhstan along with his two colleagues – Russian commander Yuri Malenchenko and NASA astronaut Tim Kopra, Peake was already downing four cans of beans an hour.

“We’re doing an experiment on how zero gravity farts travel. For example if I let one off at one end of the ISS, how long will my gaseous niff take to travel to the end of the station. Also we want to know how many cans of beans it takes to propel oneself around in zero gravity just from farting,” Peake revealed.

Peake has been warned though, his methane bottom burps could ignite within the confined space if the air filter system is faulty.

“If I fart too much, say I eat too many cans of beans, there could be a cataclysmic blast parping through the hull of the space station and everyone would get sucked out into the vacuum of space,” Peake added whilst farting into his space suit.