This is now Katie’s third attempt in one week to escape from the dangerous Scatology cult who’s headquarters are situated in Los Angeles.

Eyewitness Dan Silvaro, a trucker who was driving past the heavily fortified compound retold the harrowing story: “I was driving past going through the intersection on North Beverly Drive when I saw this crazed woman scrambling out of a fifth floor window. She was shimmying down the side of the building and shouting for help. She was wearing a bizarre Santa outfit and her eyes were all crazy. Looks like she used some bed sheets she tied together or something. I stopped my truck and she got to the door but some people came and took her away. She was crying so bad it broke my heart. I actually held onto her but they got her.”

People were visibly shocked at witnessing such a display of bravado by the ailing actress.

To date, no one has been able to escape the Scatology cult which was formed over thirty years ago by a man who claimed that he was in touch with aliens that live in toilet bowls called Klingons and Dingleberries.

The Church of Scatology also has offices all over the world and is always expanding its faecal matter.

The actress, Katie Holmes who is married to famous actor Tom Cruise, has not been heard of for the past three days and many in Hollywood fear she is having to undergo re-education in Scatology Toilet Laws, an extreme Church of Scatology program that involves hourly colonics and enemas. 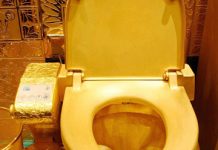 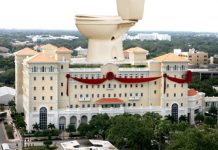