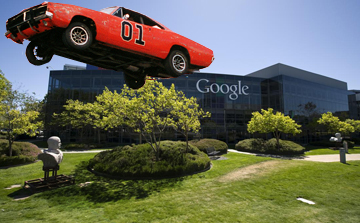 “I get a tick, like my right arm raises up every few seconds, and this can be dangerous especially if there are people nearby or I’m peeing in a urinal, or eating a chocolate gateaux in a diner. Unless I see my project through or I have an amazing idea I gotta do it or the tick takes over. I was in the lab and I told the supervisor I have to make a car, they didn’t question it and said go ahead. When I was a kid I was a huge fan of Bo and Luke, and the General Lee of course so that’s what I did. This thing can shoot off bridges, jump canyons and even lose cop cars driven by real cops. It took my three years and when I presented it to the good ol’ boys at Google, you should’ve seen their jaws drop,” Mensch told SciTech magazine.

During the test drive last week, the car performed so well it completely wrecked the whole car park where Googlers like to park their assorted vehicles.

Google representative Josh Mulnick explained to the the press that the incident resulted in the firing of Mensch.

“Here at Google we like innovation and creativity but this was beyond any barriers. The robotic General Lee was zipping around and it even has a speaker with Yee Hah sounds. Not only that it has an offensive non-pc flag on its roof which I can’t even bring myself to mention. This thing is Obama’s and Google’s worst nightmare.”