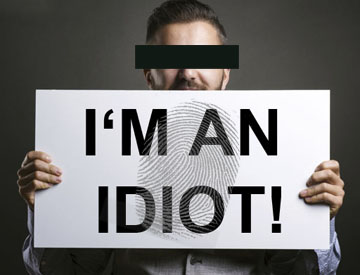 The researchers claim their findings could prove useful not just for idiots everywhere, but also for morons and assholes who seem to inhabit daily life across the planet.

Professor Iddy Otte, an anthropologist at Kentucky Fry University, who led the study, said: “This is the first study to look at this issue at this level of detail, and the findings are extremely promising. There are fu**ing idiots everywhere. Jeez, I just found out I’m married to an idiot.

“This finding also tells us that there’s a level of variation in idiots like you have major idiots, really dumb idiots, morons, useful idiots and darn right assholes.”

The researchers, whose work is published in the American Journal of Physical Anthropology, examined the right index fingerprints of 456 individuals.

Professor Otte, who worked on the project with student Nichole Moran, said: “The Level 2 detail that was significant for idiots was total bifurcations, like it was totally off the scale man.”

It raises the possibility that there may be more details contained within fingerprints which may help trace a person’s idiot ancestry.

“That means idiots go down the line, hell, your whole family tree could be populated by idiots and assholes. This research just blew us away”

The ongoing research project also tested former president George W. Bush and found out he was actually not an idiot but just a total asshole.