The groundbreaking discovery was made off Yoshie Reef near Semporna Beach in Borneo.

Scientists were diving in the Reef area when they managed to take a photograph of the creature.

Chief Scientist Dr David Warner was about to abandon his dive when he saw the creature, “We were in the area and damn pissed off that we had not found our own Octosquid creature. We’ve been here for 3 years and all we get are regular tropical fish, no giant squids, no octopus’ and certainly no octosquids. Then out of the blue I saw this thing come at me then flit off like a bullet. I nearly swallowed my breathing apparatus. As you can see from the picture it is a mermaid creature and humanoid with a fish tail.”

The Scientists are now whooping with delight that their expedition has finally come up with a new discovery.

The Californian Institute of Marine Biology was about to abandon the doctors research grant within six months but now he is certainly going to keep the funding.

And now what the world has all been waiting for; the unveiling for the first time in any publication and exclusively only on the Daily Squib. 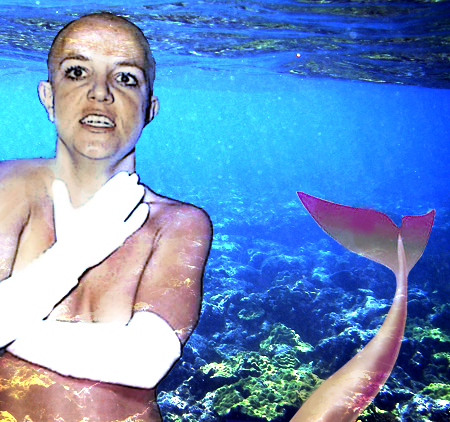 The creature appeared out of nowhere then swam off at high speed
The scientists still have to name the new creature and have exclusively asked our readers to submit names for it.Please forward your name suggestions to [email protected].

The winner will be given a full expenses paid trip to Borneo to carry on the search with the expedition for this wonderful and fascinating discovery.