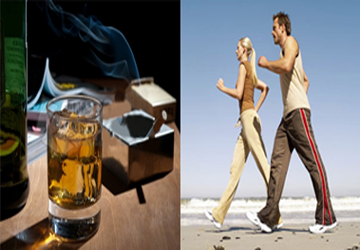 The international study utlised data from 10,934 subjects over a period of twenty years and from many social strata. The conclusions are a shock to many who think that being healthy and fit will stave off death.

“This study proves that people who exercise daily and eat healthy diets are just as susceptible to death as unhealthy people who indulge in pursuits such as drinking alcohol, smoking, taking drugs and having loads of wild sex fun,” Professor Joseph Edelweiss revealed.

Keith Pilchards, 74, from Chicago, USA,  was one of the study subjects and is deemed as having an ‘unhealthy lifestyle’.

“I been doing it for seventy four fuckin’ years mate and I ain’t croaked yet. Look at me, I’ve watched all those healthy people drop dead and I’ve had a good time. I eat what I want, smoke what I want, fuck whoever I want and drink what I want. I’d rather have my Dionysian ode to a Bacchanalian life and not some boring crappy health-freak non-existence, where you cannot eat anything, you have to exercise all the time and you can’t have a good session or stay up for four days in a row partying.”

Another subject, Robbie Dickinson, 39, from San Diego, USA, used to be a health fanatic, who sadly passed away last week. He lived a totally healthy lifestyle with an all organic macrobiotic diet, constant gym workouts and regular detox regimes.

“This guy never ate a piece of pizza in his life, never guzzled beer, never got his leg over with some broad he just met that night, never lived. We know, for example, that he would tease himself everyday by putting a slice of pizza in front of himself and would be sweating profusely just at the thought of taking a delicious bite: instead electing to just eat birdseed and lettuce. He certainly did not indulge in a Filet Mignon or three washed down with copious amounts of wine. In essence, he was a boring old fart, and his ‘life’ if you can call it that, was pitiful to say the least,” Professor Edelweiss added.

Other scientific facts discovered in the study were even a surprise to the researchers.

Drugs are generally good for you if used in moderation. They can not only be used correctly to increase one’s consciousness but also to garner a broader understanding of the universe, art and life. Psychotropic drugs as well as cocaine and heroin in particular can be incorporated into a person’s lifestyle for prolonged periods, without any adverse effects if utilised without excess.

“A little heroin or opium in the mornings, maybe some cocaine for lunch, then in the evening an aperitif of hashish whilst servicing some young lady I just met. A little indulgence here and there never hurt anybody did it? Everything always in moderation I say,” another subject, Oliver Weed, 89, from London, UK, said.

So, go on, indulge, have fun, because you’re only here once.