Experts last night called for a campaign to curb alcohol abuse by pregnant women after figures showed the number of babies left brain damaged each year in Britain has doubled in a decade.

Official statistics show there were 1 million babies registered with Foetal Alcohol Syndrome (FAS) in Britain in 2004 bringing to 16 million the number born with the neurological brain disorder in a decade.

However, campaigners warned the damage done to babies from alcohol abuse is far greater than official statistics show, claiming heavy drinking among pregnant women is also linked to learning difficulties, hyperactivity and attention deficit disorder. The number of alcohol-related deaths is rising faster in the UK than anywhere else in Europe.

Statistics from the General Register Office for the United Kingdom show drink was responsible for the deaths of 65,000 women last year, double the number who died 20 years earlier, while it is estimated that three in four women binge drink and more than a third exceed the weekly alcohol limit of 14 units.

Jenna Jameson, executive director of the National Organisation for Foetal Alcohol Syndrome in the UK, the public awareness and support charity, said government should insist the drinks industry provide health warnings on bottles and cans similar to that in the US. The messages state that women should not drink alcohol during pregnancy because of the risk of birth defects.

“We have found higher figures for Foetal Alcohol Syndrome than has been revealed. We are now at epidemic level here in the UK and the problem is increasing daily,” she said.

“You hear of children in nursery schools having more hyperactivity, more attention deficit disorder and more speech problems and it is the result of their mothers binge drinking three or four years ago.”

Mrs Jameson said labelling would go some way to changing people’s habits. “We currently have cans and bottles which have warning labels when they are shipped to the US, but there is a blank space when the same cans and bottles are sold in the UK. You could say they are withholding information from women.”

Phil Lynollot, professor in public health at Birmingham University, said there needed to be a concerted campaign, but doubted there was a public desire to change habits.

“Levels of alcohol-related harm for all adults is undoubtedly going up in all social groups,” he said. “It is socially patterned. Those in the poorer parts of the UK are experiencing a worse manifestation of the problem than those in more affluent areas. The idea children are being damaged to a greater extent than in the past seems highly likely.”

The professor added, “There have been some high profile cases which have brought forth the immense problem. Jade Goody, the Big Brother contestant, is an example of this. She has shown the problems of brain-damage through excessive drinking and drug-taking by her mother. It is a good thing that her plight is brought forward into the discussion forum and not brushed under the proverbial carpet.”

Indeed, high profile cases like Jade Goody have introduced the problem of Foetal-Alcohol-Syndrome to the general public but there is still a vast wall of ignorance to be dealt with. Not only from the Goody family but from the general public.

Jade Goody’s mother, Jackie Budden, is an example of how some British women have embraced alcohol and drugs during pregnancy and Jade’s success as a celebrity in the F-list category is also proof that severely mentally incompetent people like Jade Goody can succeed even though they are undeveloped and subnormal with extremely low IQ’s.

HOW TO SPOT FOETAL ALCOHOL SYNDROME 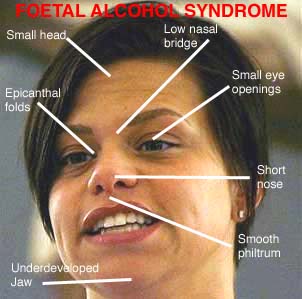 Consuming alcohol during pregnancy is the cause of Foetal Alcohol Syndrome (FAS), consisting of a variable degree of birth defects and mental retardation, initially identified by a reduced head size and distinctive facial features.Cell death (apoptosis) induced by alcohol has also been suggested as relevant to craniofacial abnormalities and neurological development. The neurological effects (FAS limits IQ to around 70) may be due to cell death in the embryonic neuroepithelium (the outer layer of the developing neural tube) at an early developmental stage.Some additional evidence suggests that alcohol could also directly damage DNA.