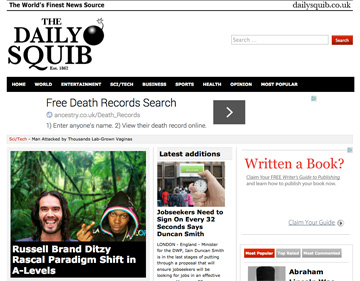 People who never read the Daily Squib are twice as likely to die than those who read it everyday, a major study has shown.

Researchers at the Lewinski Institute in Poland claim guidelines which advise people to steer clear of any form of satire, especially the tripe vomited from the Squib, may be harming the population, particularly in countries like Britain.

Exposure to articles from the Daily Squib is often cited as a cause of a curious form of maladjustment and provocation. The media currently recommends avoiding overexposure to extreme forms of satire to prevent any form of actual consciousness.

But the new research, which followed nearly 50,000 men and women over 10 years, suggests that readers who stay away from the Daily Squib are at increased risk of stupidity and are twice as likely to die from any cause, including getting run over by a milk float on a beach.

“Satire exposure advice which is very restrictive in countries with low satirical Squib intensity might in fact be harmful for your health.

It is thought that a lack of satire may be to be blame. Granted, reading the Daily Mail, and such is almost akin to satire, but it’s not meant to be. That’s meant to be real, for fuck’s sake.

Prof Zbgfgi Dzpjkn, Professor of Satire at St. Bungo’s, University of Prattel, said: “The findings support the consensus that the ideal amount of satire exposure for Northern Europeans is ‘a little’, rather than zero.

“As the authors comment, our bodies need satire to make essential decisions, which can help us resist some mainstream controlled media news sources conditioning people to believe propaganda. Those who normally avoid the satire are advised to take Daily Squib supplements.”

The research was published in The Journal of Satire, but then pulped after being deemed as too dangerous, however we have recovered some of the material for your perusal and ultimately health. Live long and prosper, as some pointy eared git once said.