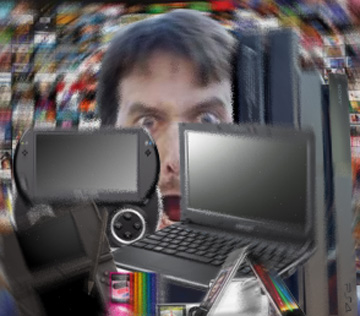 Police officers and EMTs at the scene were so horrified attending the deceased man’s apartment that many needed counselling afterwards.

“What I saw that night will remain with me for the rest of my life. This guy had, iPhones, Android tablets, iPads, iPod touch, PS3, PS4, X Box One, Nintendo; hooked up was also a kindle book reader, a home cinema entertainment centre, a top of the range hi fi system, strobe lights and he even had a pc gaming system going all at the same time while he was still wearing his Google glasses watching about 45 screens. Somehow he just blew his brain. We found it in the corner under a pizza box with a half eaten pepperoni pizza inside. That’s when I just started gagging and puked on the man’s collection of remote controls and usb cables.” Officer Arnold Dietler of the LAPD recalled in the crime scene report.