Ms Osbourne was visiting a farm in the Rancho Del Mar district outside Los Angeles when she was seen to lose control of herself and start to eat everything in sight.

“I never seen anything like it. They paid me some money to use my land for a photo shoot for some stupid show. This lil girl comes along then gets all bug eyed. She then started to sniff and snort the air, like she smelled something rustling in the pig pen. Well, that was Cooter my pot bellied pig, he was three years old and he was like a family member he was. She’s a goddamn murderer, my family are going to sue her for the distress she’s caused us. She ate him raw and one of his trotters was still sticking out of her mouth when she walked out of the pen,” Samuel Fink, 56, who owns the Desperado Ranch, 34 kms from Los Angeles reported.

The 25-year-old singer has been showing off a slimmer, healthier figure in recent months because of her three pea a day diet. However, close friends of the talented star have told of the anguish Ms Osbourne puts up with in maintaining her new physique.

“Kelly would eat everything. I once saw her eat a whole live chihuahua in one gulp, she was that fucking hungry. I don’t know whether she was following her dad’s footsteps but if she was hungry she could eat shit off a sidewalk or a live bat from the ceiling. If you dropped a cream cake in pile of steaming cow manure, she would lick that shit up like it was glazing on a cake,” Marcia Ducunnie, a long-time friend of Kelly’s told the LA Times.

Recently, doctors in charge of Kelly have been concerned for her welfare and her dangerous lapses in enforced dieting.

Doctor Jacob Steinburger, a famous Beverly Hills practitioner, told the Hollywood Weekly: “We have to chain her down sometimes in the office or put her in a cage. If you dangle a cupcake in front of her face you can actually see foam coming out of her mouth and eyeballs. Some of the words she says as well, can be distressing. Luckily, the money from mummy and daddy Osbourne compensates me for my trouble in dealing with their awful offspring.”

“If I want a piece of fucking cake I’m going to eat a fucking piece of cake. You better believe me when I say, I want that cake or I’ll eat your fucking arm off bitch!”Kelly Osbourne told a CBS reporter who was eating a slice of cake at another photo shoot in Hollywood last week. 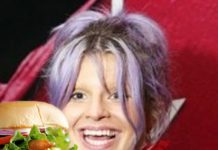 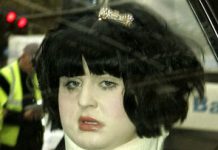