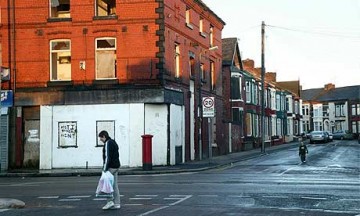 Scousers will steal anything and this time they’ve gone too far, they have seen fit to steal small-time comedian Bill Bailey, a regular slot on self serving cronyistic bottom-sniffing BBC ‘comedy’ shows.

No one knows his whereabouts and the police can’t be bothered to search for the comedian because so much stuff goes missing in Liverpool anyway and this is at the end of the list.

Police Constable Nick Louser, for the Liverpool Constabulary was adamant that the comedian was somewhere within the continent of Europe by now or possibly Africa.

“In Liverpool, if it’s not tied down with a thick steel chain, it’s gone in sixty seconds. Last week scousers stole the tires off all our police cars, resprayed the vehicles, and sold off all our cop cars to the Romanian police force while we were still in them.”

If anyone has any information about anything…..