Fresh from the bingo hall the Spice Girls now come resplendent with a full set of bingo wings to match.

They will soon embark on a world tour because they need money, well, Posh Spice who is the bones behind Beckham does not but the rest do.

“I need a new washer and dryer,” Sporty Spice says as she bemoans her last washer chewing up her tracksuit bottoms and other chav gear.

“I need a new Stenna stairlift for my mansion,” says Ginger Geri-atric Spice.

“I need a new personality because I never had one anyway,” squeaks Baby Spice Bunton with a vacant look. A tall order if we ever heard and one that money can never rectify.

“I need a new man,” says Scary Spice as she looks through a paternity dossier from her lawyers.

“I don’t need anyfing because my David gives me anyfing I want innit,” says Posh Spice pouting like a simian sour lemon. 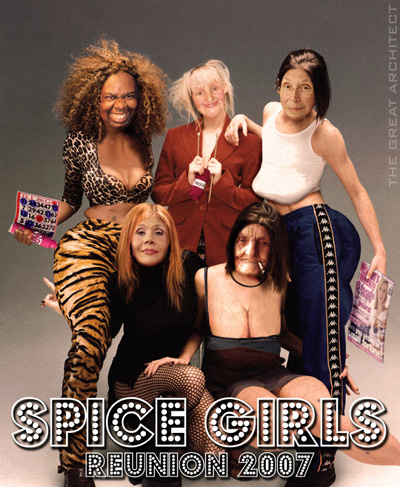 The Spice Girls will all rake in 10 million pounds each for the worldwide tour.

This is not a bad proposition seeing as they do not have to sing one note throughout the 20 date tour.

The Spice Girls who have no talent or musical ability whatsoever have been busy in the studio putting down tracks so that they can mime to all the songs on stage.

“We have them sing in the studio, well, they can’t sing per se, they just grunt and besides it is so off key anyway,” one of the engineers says “…but after we digitally assist their atrocious voices we have them sounding like angels, and hey presto!”

The Antares technology used can alter anyones voice to sing in correct pitch in real time and in the studio.

The Zimmer frame Girls are currently having a refresher course about the art of miming from their first days of fame with a professional mime coach, Ashlee Simpson, who has been recruited for the extensive tour.

“It’s been many years since we been on stage miming so we got all our ‘zimmer zimmer ah’ dance moves together too innit!” says Posh Spice from her Aston Martin Vantage.

Wishing the Girl Power team a great cashing in season from the Squib office.