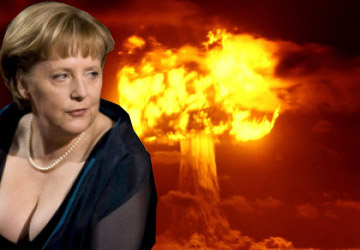 There’s nothing like a good game of ‘nukes on the loose’ to put a few beads of sweat in your cleavage, as Frau Merkel found at a recent meeting with some heads of state.

“Obama told me to press the red button so I did and incinerated Frankfurt by accident,” Merkel said looking all agitated.

President Obama went a step further and let one off in Detroit, turning it into a waste land, not much difference there then Barrack.

As for Cameron, in his game, he found a dirty bomb under Salmond’s desk, and promptly allowed it to explode flattening Glasgow.

Surely these sort of games are in bad taste, whatever happened to a little checkers or chess?