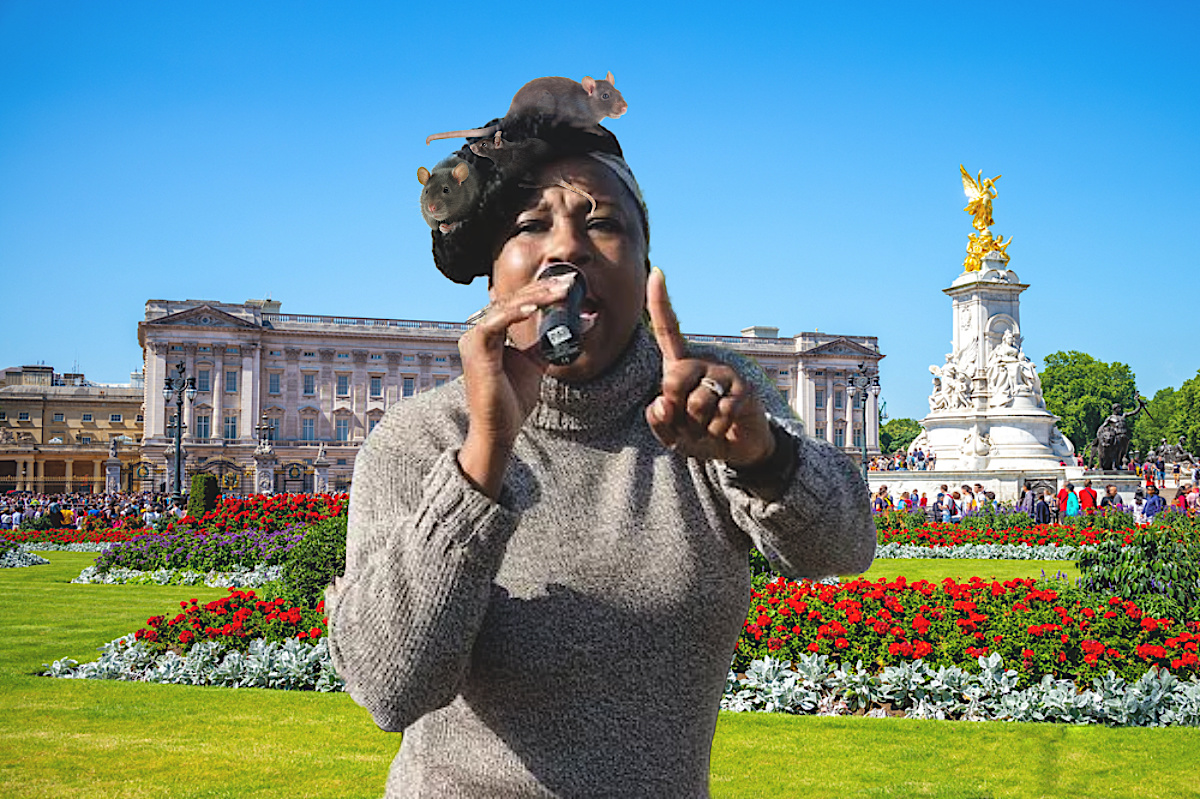 Some people say that Dr Shola Mos-Shogbamimumu has a few chips on her shoulder and is an aggressive militant anti-British racist, we however thought we could maybe attempt some sort of restorative action to her nasty reputation.

Our reporter was invited to her Brixton 10 bedroom home decorated with African masks where she lives alone.

Daily Squib: Thank you for agreeing to the interview, Dr Shola.

Dr Shola: Hang the British Queen from the lamp posts outside Buckingham Palace. I hate the British scum, you are all racist and deserve to all die. Kill all English people!

DS: Do you think your ugly reputation as a rabid anti-British anti-white angry racist black woman is justified in any way?

DR S: I want reparations for every black person equalling to £5 million for each of us. You owe us! I also want the British monarchy abolished and every non-African to be dragged through the streets in shame and the Queen should be stripped and beaten in the streets…innit! (thumps fist on table and vase falls on floor smashing into little pieces)

DS: If you hate the British people and the monarchy so much…er…why do you still live here? Why not go back to Nigeria?

DR S: It is my job to hate you evil people. I have come here to create discord, chaos and inspire race riots as well as an uprising against the Queen. I hate her! I hate everything about her! I am here to inspire a Marxist revolution against the British system, plus I get benefits innit.

DS: Looking at your CV, indeed it is apparent that you are a trained Marxist specialising in soviet woke ideology. You teach intersectional feminism to female refugees and asylum seekers and gender and diversity inclusion, organising race baiting feminazi marches and social campaigns. That is quite an impressive résumé.

DR S: Fuck the Queen! Fuck Britain and may you all go to hell! I want to destroy you bastards one by one! I hate you all! I want you all dead! (by this time her mouth is frothing)

DS: You got your doctorate at Birkbeck college, a distinguished educational establishment. Who needs Oxford, Cambridge, Yale or Harvard?

DR S: I am a doctor and I am qualified in many things…er…Fuck the Queen! I hate Britain and the British people! I want you all dead! Fuck William and Kate and their fucking racist children! Fuck the British national anthem! I hope Putin nukes Britain soon! You are all racist bastards! You are all going to die! Wuah hah hah hah haaa! (Dr Shola’s eyes roll up in their sockets only showing the bloody veined whites. The froth from her big fat mouth hangs from her chin and swings like an unholy diseased cobweb in a breezy dungeon).

DS: Did you enjoy the Queen’s Platinum Jubilee celebrations? It was a truly wonderful example of royal pageantry.

DR S: English scum white racists! The Queen can go to hell in her gold carriage stolen from Nigeria! I have had enough of you! (throws a book about Marxist Agitation Techniques at my head)

The interview is over, I am literally thrown out of her home as she screams and rants at the top of her blood-curdling voice. She is now throwing pieces of furniture around, and at one point picks up an entire bookshelf full to the brim with books on guerilla Marxist activism and other assorted nasties.