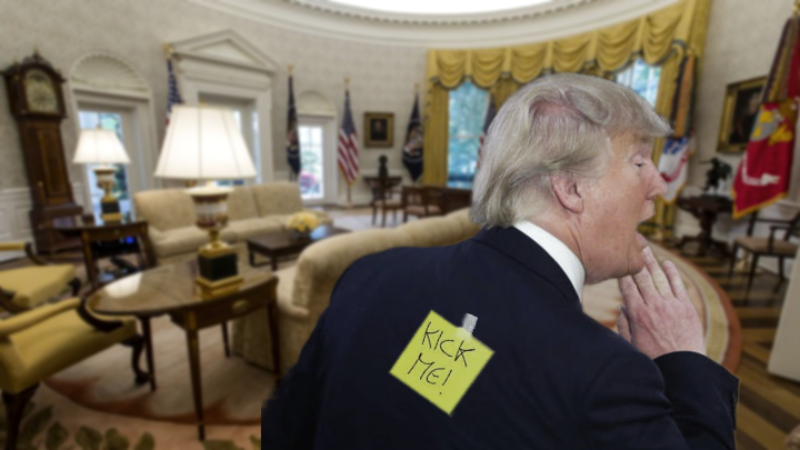 Here’s a guy who said he would clean out the swamp when he became president. Well, good luck with that because at the moment the Teflon Don has both legs sinking in the swamp and is already up to his waist in it.

With news that there are saboteurs all around the prez in the White House sabotaging his every move, who is left to trust?

The sad truth is that sure Trump is tough and knows business, but is he this blind that he can’t sniff out the snitches amongst the White House crew?

How about getting some trusted secret agents to actually do their job and turf these rats out of the building?

“Trump needs to trust the people around him. I say waterboard the fuckers. If they don’t confess who they’re really working for, move on to fingernails, or sit them in front of a nude photograph of Nancy Pelosi for twenty minutes till they crack. There has to be a way to stop these snitches,” another White House insider revealed.

The infiltration is so thick in the air, you could cut it with a knife, and it is not going to stop there, it keeps going on and on relentlessly, with every news story published in the daily news reports.

Can this stuff be categorised as espionage, or treason? Well, hell yeah! This is what Trump should be doing, he needs to put these people in the stockade, and throw away the key for thirty or forty years. Do these people not sign disclosure forms before they start employment? One would think this is a requirement in the White House.

Whatever happens now, Trump is being made to look like a blind fool, he even has papers taken off his desk without him realising, and key policy decisions skewed by his so-called ‘assistants’.

Wake up Mr Magoo, and get with the program. The whole place is laughing at you behind your back. They probably pin ‘Kick Me!’ notes on the back of your jacket when you’re not looking.