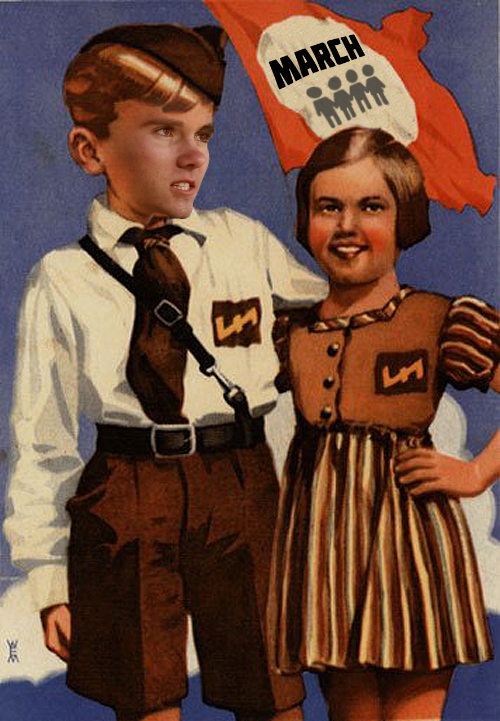 In the past, the youth protested to gain more freedom. Today, they protest to have their freedoms taken away.

To protest against the right to defend oneself or one’s family is the sort of deranged state the youth are in today. These indoctrinated lemmings seem to be reading from someone’s script, and they do not really know what they are saying or what freedom fundamentally means.

Actors in the current chess game, pawns like Hogg, a jumped up little turd who is so autocued you might as well see the strings controlling him as the puppeteers sneer insanely behind the scenes.

What’s more, the likes of CNN and MSNBC giving this fucking boil on the arse of humanity air time and demagogue status stinks to high heaven.

“These are children. Brainwashed children doing the bidding of their masters. Hogg, is a dastardly yellow stained twink, hogtied by his controllers, told to bend over and take the big one for the money. Superstardom for the little squirt as he spits his fake Goebbels anecdotes, raises his outstretched hand whilst spouting scripted stories to a cheering Jugend audience,” one commentator revealed.

Another observer observed: “Fundamentally these kids have grown up in a dumbed-down time. They cannot have a thought for themselves, they do not know how to function without someone telling them how to think. Their indoctrination is so ingrained, that it is scientifically impossible to undo the damage. They have grown up with no privacy, or freedom, so who can blame them when they march to take away the hard fought freedoms that soldiers in both world wars died to protect.”

The sickening sound of brainwashed chants coming from the very well organised and funded rallies, does not look like a real spontaneous rally where people do something out of genuine emotion, instead it looks like carefully choreographed crisis-porn. Certain agencies have certainly capitalised on tragic school shootings to manipulate these poor misguided children into an ongoing agenda.