“Every year I put a notch on my calendar telling me when the shooting season is going to begin. This year it started three days early, that’s why I got shot in the leg and am now in the hospital,” Gina kolovic, a resident of Phoenix, Arizona told the Herald Sun newspaper.

All across America, the shootings and massacres have started surprisingly early this year with 24 colleges reporting killing sprees, 320 store shootouts, and over 20,000 random shootouts .

“It’s like hunting season, you gotta have special times for that. If you don’t own a gun, then you gotta know when to stay home and barricade yourself away. The start of shooting season is the most volatile, so you gotta stay down, duck at any loud noises, wear your body armour and helmet,” Julia Dannet, a Phoenix police shooting season adviser announced on Monday. 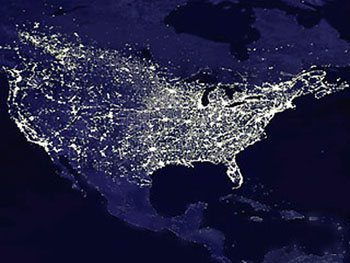 NASA has even revealed that the start of shooting season in America can be viewed from space.

Arnie Wintergantz, a NASA spokesman said: “We can see the guns going off from space as the shooting sprees start across the country. Because the firearm bursts are so numerous, the light flashes are visible to our imaging satellites. I gotta say folks, it’s a lot safer being in the space station looking down on America then being right there in the war zone.”

A recent victim and survivor of a mass shooting in a Walmart store, Louise Bellatrix, who was shot in the abdomen multiple times, spoke of her despair.

“I had put in my calendar that the shooting season would start next Friday. Well, I was wrong about that. How surprised I was when out buying some last minute Darjeeling for a tea party, the crazed gunman came out of an elevator with an AK-47, two rocket launchers and a dozen grenades. Let’s just say the bodies were waist deep after he finished his shooting season fun.”