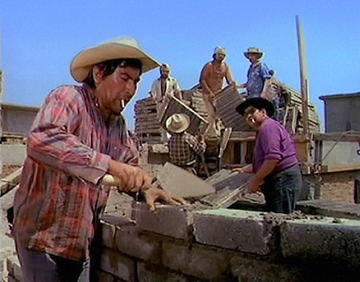 “We have taken up the mantle to build the wall and will foot the cost as well. As agreed, the wall will go along the entire U.S. Mexico border.”

Unbeknownst to Trump, he did not specify how tall the wall should be, and when he finds out the wall will only be three feet high, he is sure to hit the roof.

“That is a minor detail we did not reveal to Señor Trump. The wall will be three feet high but it will fulfil our contract, and there is nothing the Don can do about it. Even an eight year old kid can jump over,” the Mexican president added.

Trump was not available for immediate comment when contacted.

To commemorate the three foot high wall, a poetic plaque will be put up on each side. One side will be in English, the other in Spanish.

A is for the angst we feel every time he speaks

B is for the “Bigger Button” he purports to keep

C is for the Climate change he’s eager to deny

D is for Ms. Daniels, her silence he could buy

E is for Ethiopia, a “shithole” in his view

F is for Flynn, who copped a guilty plea

G is for Gates, now he plead guilty too

H is for Hilary, the one he loves to hate

I is for Ivanka, the daughter he would date

J is for Jared, who met with all the Reds

K is for Kelly, who tries to keep his head

L ‘s for Lewandowski, who was fired and then re-hired

M is for Paul Manafort, and nemesis Mueller

N is for the NRA, and all its campaign fuel

O is for Obamacare, he’d like to pack away

P is for Pussy; there’s nothing more to say

Q is for Qatar, a diplomatic blunder;

R is for Reince Preibus, the first to go asunder!

S is for Stable Genius; (it really makes one wonder!)

T is for Twitter, we wish he’d use discretion!

U is for the U.K. – our friendship now is threatened

W is for the Wall he says that Mexico must build

X is what we hope he’ll be and, boy, will we be thrilled!

Y is for Yesterday, when civility expired

Z is for Zero, or the good will he’s inspired

Poem written by Cheryl Randall, Esq. a keen granny activist from upstate New York on a mission to stump Trump.