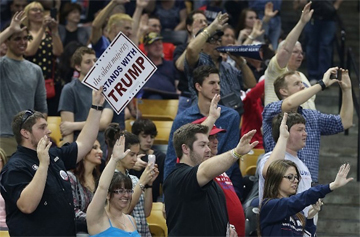 At a recent Maine campaign rally, Trump followers were berated by their leader for making sloppy salutes.

“You have to extend your arm fully and the fingers have to be pointed. C’mon guys, this is ridiculous. Look at that guy there, his elbow is bent. Straighten the hand. That’s it, that lady there she got it.”

Some commentators in America have been calling it the Nazi salute, but Trump’s campaign boss, Billy Schmitz, denies this accusation.

“This is the Trump salute, no Mussolini or Hitler involved. Besides, no one in the crowds knows who those people were any way.”

It is true to say that most Americans have little or no idea about history or that there is a whole world outside the USA, however if they knew some modicum of knowledge, they would not be backing Trump.

“Shh, whatever you do, do not tell anyone what Trump is doing? We do not need people who read books explaining how this stuff works, and we especially don’t need Trump followers asking questions,” the campaign manager later said under hushed breath.