During the high security visit by Senior Deputy Commissar of the Labour Party, Harriet Harman, the Comrade in arms with Supreme Unelected Comrade Gordon Brown, was protected by a phalanx of thirty Stasi Police officers.

Any proles within the area were told to stay back and were not permitted within 100 metres of Comrade Harman.

Wearing a stab-proof Kevlar vest on the London streets, Comrade Harman walked on the same dangerous roads as the prole masses and was not stabbed or shot once during the whole visit.

“By walking these streets I have shown the masses that we are living in a new era of safety and change. Since our Supreme Commander in Chief Gordon Brown was instated into our one-party system we have had unbridled freedom to walk the streets without fear,” Comrade Harman exclaimed to our reporter from the armoured vehicle after her tour. 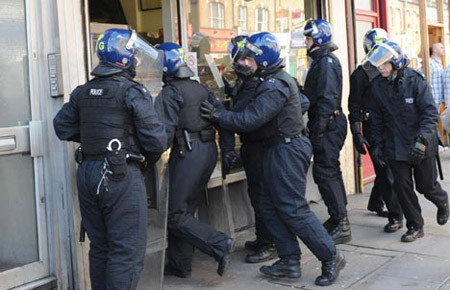 Not since last month when Comrade Jacqui Smith of the Labour Home Secretariat decided to buy a doner kebab from a prole food stall within the sector has there been such daring shown.

She bought the kebab resplendent with a liberal dollop of chilli sauce whilst flanked by no less than ten armed Bolshevik soldiers.

…and the Mean Santa Award Goes to…