In a bizarre nightclub confrontation, the perpetually hungry Jade Goody tried to eat the flesh of a female nightclub reveller last night.

The unnamed woman who was dancing around her handbag in an Essex nightclub frequented by Z-list celebrities and footballers was suddenly set upon by Goody who was smacking her huge lips all night.

“Jade was salivating all night, she had just had four vindaloo curries, ten happy meals and four KFC buckets but was still hungry for more,” a member of her extensive entourage told the Daily Squib on condition of anonymity.

Jade attacked the woman then tried to take out chunks from her face, she successfully bit into the womans thighs and was chewing ferociously when a nightclub bouncer intervened and ejected the cannibal from the dance floor.

“It was murder on
the dance floor, there was blood everywhere. I found a chunk of thigh on
the floor and handed it back to the screaming woman writhing on the
floor in agony. Jade had a wild animal look in her eyes and was barking
like a dog. It was quite scary,” footballer Joe Cole told the Squib
still in shock. 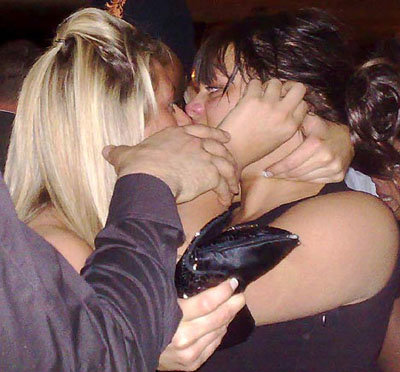 A hungry Jade Goody attempts to bite the woman’s cheeks

The nightclub owners were quick to respond and soon a Police unit was on site and Goody was shot with a tranquilliser gun. The celebrity has since been transferred to an undisclosed location for her own protection.

Goody is famous for being as thick as two planks and a racist bigoted ignorant imbecile. Channel 4 television capitalised on Jade’s rating winning qualities by promoting her to the chav populations of Britain. Since then she has become a heroine and star to a large section of Britain’s population.

Last year she was coaxed into taking an IQ test live for Channel 4 television and scored 25. Individuals with an unusually low IQ score like Jade Goody, varying from about 70 (“Educable Mentally Retarded”) to as low as 20 (usually caused by Extreme Mental Retardation), are considered to have developmental difficulties.

Remember When the Earth Was So Fresh and New

Magnificent Meghan Markle Gets Ready For Pregnancy in Home Gym

End of Lockdown is the Refuelling Time For Virus