Speaking to the Daily Squib from Eco Town BS232 Sector 101, Mr. Bean (previously Comrade Brown), is in a bit of a bungle at the moment since funding for the upcoming Mr Bean film has been lost in the post.

A bankers draft for 25 million pounds was given to Mr Bean/Brown by taxpayers last month for the purpose of funding the production.

Instead of sending it with registered mail or a security van, he sent it through the normal post. Now it’s nowhere to be seen. Ooh bungle bungle!

Things have gone from bad to worse for the film, which is being financed by Northern Wreck and some other dodgy sources, as now the cast and Labour crew are all part of a criminal investigation.

Can things get any worse for this ailing cast?

Mr Bean’s bungling sidekick Darling has been fumbling his way around in the dark as has Harman. Without any valid leadership, they are all destined for the bargain bucket of inequity.

The production has hit the rocks and now resembles an unholy shipwreck. “Bring back Tony!” proles are shouting from the rafters. There’s nothing left for it but to jump ship. Our slimy mate Tony did, and he did it pretty sharpish. He must have known that the proverbial would hit the fan. He will soon be shouting: “I know nothing!”

Can Mr. Bean Broon save the day? We in the dark, dank offices of the Daily Squib are taking bets right now. 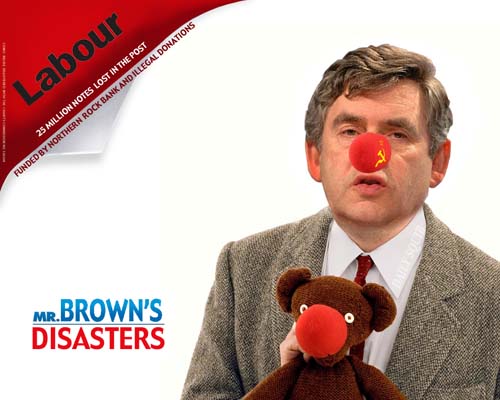 ‘Mr. Brown’s Disasters’ is set for periodic release in all nationwide cinemas for the next three years whether the public likes it or not. To order your tickets call Ant and Decs ticket giveaway now 0898 2343 82212. Calls cost £32,056 per minute off peak. Call charges may vary depending on how much more they want.