Buzz Aldrin recalls the moment during filming when his spacesuit’s visor suddenly flipped up and a bluebottle fly landed on his nose: “We had just filmed the bit when Neil said those historic words, when I had a major malfunction on my goddam spacesuit. We had to do about six takes before we got it right and it didn’t matter how much aircon they had on it was so hot I fainted three times from heat exhaustion. People don’t realise how heavy and cumbersome those suits were in the earths gravity. It’s like walking around with 400 pounds of lead on you. If we were in a weightless situation it would have been totally different though.”

Ever since that fateful day on July 20th 1969, the secret warehouse where the moon landings were filmed have remained empty because of secrecy laws pertaining to the sensitive nature of the whole moon landing operation.

NASA, however, finally relented to the crisis in government funding and has had to put the massive warehouse on the market.

“This is some prime piece of real estate right here. We’re talking about making this into a casino or an amusement park or even a place where they can hold rock concerts. We’re still not sure how much the warehouse will go for but we could be talking as little as $4 million. Now, that’s what I call a piece of history right there. I know developers who will bid for this and go crazy for the opportunity of a goddam lifetime,” Eli Horovitz, a real estate agent from Las Vegas said.

The warehouse was finally decommissioned in 1972 after the last manned moon landing.
The property auction for the moon landing warehouse will be held on August 15 of this year at Caesar’s Palace, Las Vegas, Nevada. This is your chance to own a part of history. 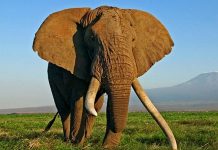 NASA: Elephant to be Taken to International Space Station