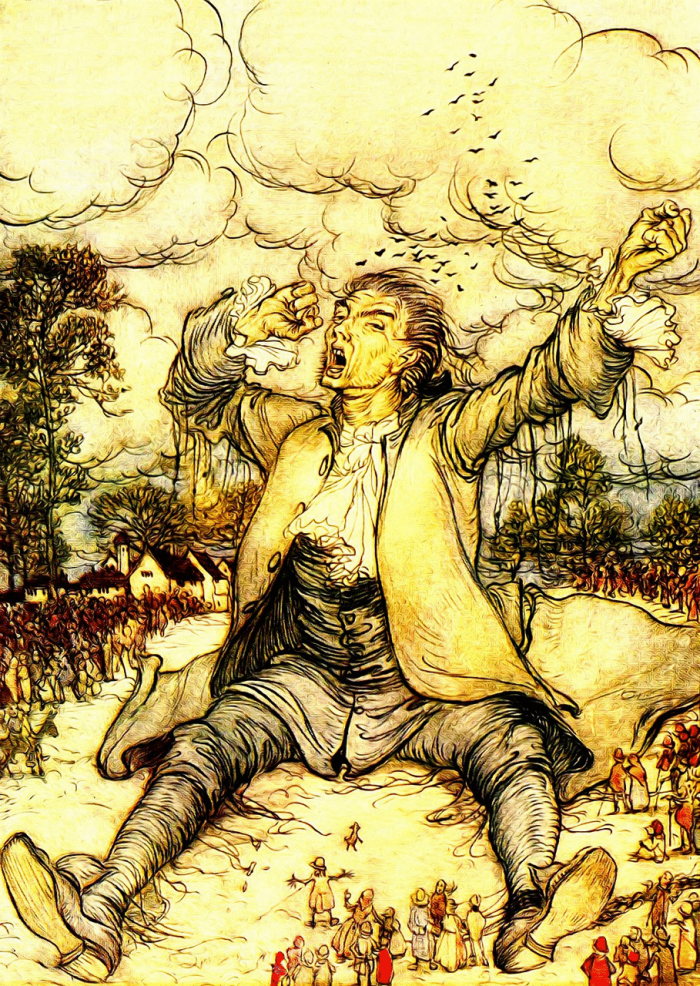 It’s easy to think of satire as a contemporary phenomenon, but it has its roots in the 4th century BC when Aristophanes wrote plays attacking the Athenian demagogue Cleon and the political system of the time. You only have to read his play ‘The Wasps’ and its satirical depiction of the law courts of the time to see how it can be applied to countries where people sue for real – or imagined – problems.

One of the greatest satirists in the English language is the Anglo-Irish man of letters, Jonathan Swift (1667-1745). It is therefore a shame that his ‘Gulliver’s Travels’ is treated as a children’s tale. In fact, many editions and film adaptations only consider the first part of his adventures set in Lilliput.

Nowadays, it is difficult to believe that the book was so potentially dangerous for the author that he published it anonymously. Because of its politically-explosive anti-Whig content, he even had the story rewritten in someone else’s handwriting so that the original manuscript couldn’t be used in evidence against him if there were a court case.

‘Gulliver’s Travels’ works as a satire on many different levels. Superficially, it is a satire of the travelogue books which were so popular in the 18th century. A typical example is Daniel Defoe’s ‘Robinson Crusoe’ which had been published only 7 years before. However, rather than continuing Defoe’s idea of the noble savage (Man Friday), Swift was more condemnatory of mankind as a whole showing them as sly and vicious sub-humans ,as epitomised by the Yahoos in the 4th part of the book.

Swift also attacked the European governments of the time. In Lilliput, there is a long-standing war between the neighbouring country which started over which end of a boiled egg should be cracked. Many of his contemporaries saw this as a satirical reference to the historical enmity between England and France and the flimsy pretexts for war employed by both governments.

Britain’s domestic policy didn’t escape unscathed from the fury of Swift’s pen either. The courtiers and powerful men of Lilliput achieve their high office by ridiculous competitions such as who can jump the highest rather than as a result of their abilities.

This was a direct reference to the way political favours were bestowed in 18th century Britain. A system of political patronage often from private banking meant that applicants could bribe their way into lucrative positions of power which they could then milk for all it was worth.

He described the way that peers were selected for the House of Lords as ‘blurred and blotted by corruptions’. It was more than 200 years later that efforts were made to make the composition of the House more democratic rather than being a pay-off for services rendered by contributors to the main political parties while ordinary people need to apply to a new payday loans lender to get by. Click here for more information.

‘Gulliver’s Travels’ illustrates that the best satire doesn’t have to be topical because certain themes are timeless.