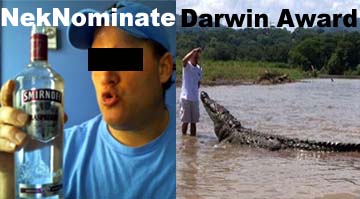 New drinking craze NekNominate has been nominated simply as a regressive evolutionary process of the infamous Darwin Award.

“This is just another form of Darwin Awardism, where the gene pool is efficiently cleaned out. Step aside, there’s nothing to see here just more idiots who are doing the honourable thing and removing themselves from the planet,” evolutionary scientist, professor Nick Nommin told New Scientist magazine.

The only difference between NekNominate and the Darwin Awards is that Darwin Awards are more creative pieces of work whereas NekNomination is simply people drinking themselves to death.

The Daily Squib staff do not do NekNominate, we just live in the pub, there’s a difference..er..we’re still living we think..hic..