We already know crustaceans and fish are infested with microplastics, but did you know that due to a little thing called precipitation (rain), microplastics in our oceans/rivers get picked up in our clouds, then they fall back to earth as rain, where they are sucked up by the roots of plants. Furthermore, animals that eat plants and farm feed, also ingest microplastics into their systems and if consumed by humans later transfer microplastics to the human food chain. 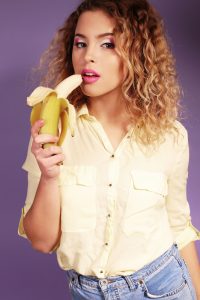 A further study published in Nature Sustainability from researchers in China and the Netherlands showed that microplastics are absorbed by the roots of lettuce and wheat crops, and transported to the edible bits above ground.

You may think you are perfectly healthy just eating vegetables or fruit without animal products, however this is not the case. You are daily ingesting levels of microplastics that are detrimental to your overall health. Microplastics, once ingested into the system are not removed by the body, instead, toxic elements within the microplastic intake build up over time, leeching into the entire bodily system. If you live in North America, one must also take into account genetically modified fruit, meat and vegetables for your health, and possible additional adverse effects on your wellbeing.

An apple a day used to keep the doctor away, not so much in a microplastic world today.