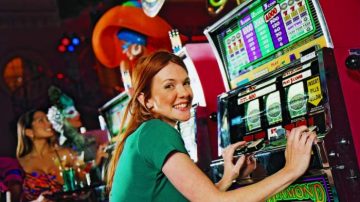 Las Vegas, the city of lights that never die, and slots that never turn off. But the same could be said about online gaming, it never stops. The neverending dream of chance and probability churns on and on like some crazy universal algorithm belched out of a cosmic mega slot in some black hole somewhere.

Does Stephen Hawking gamble? What about Michio Kaku, contemplating some multiple universe string theory whilst having a go at winning the jackpot? In Hawking’s and Kaku’s universe, we are living in multiple realities, and there are multiples of us doing different things, so in effect, winning the jackpot is just a case of being in the right universal probability at the right time.

That’s all there is to gambling, not only do you get a magical feeling when you win, possibly due to the endorphin rush, but there is the ultimate feeling that you have controlled the universe some how for that single fleeting millisecond. The best buzz you can get is winning, everybody loves it, could be that forex trade, could be that spreadbet on the footie, or just the immediate rush of winning here on the microgaming slots.

Slap down twenty five pence and win £13.2 million like some lucky British gambler managed on the slots, there are no words to even describe the total joy that must bring.

Living by the seat of your pants, just like Hunter S. Thompson. Let’s just go Gonzo, stuff the pills in, watch the bats fly around whilst reptilian police officers breathe down your sweating neck.

This is the beauty of the internet, it has brought everything into one singular accessible entity. You don’t have to go to Vegas, book a flight, or cash in the kid’s college fund, you can gamble with small amounts and win big. Keep a check on your profits, some games have four progressive jackpots, building up to the big one. This is it. It’s beautiful, not winning a la Charlie Sheen ‘winning’ but actually winning some serious moolah.