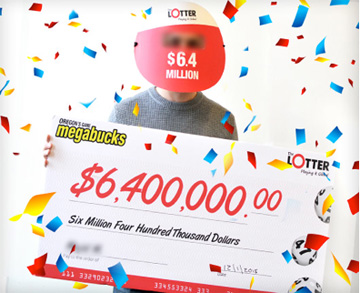 But the ticket holder did not come forward to claim his prize, until December 1st. Why the long wait? Because the winner is from Iraq and he needed time to get his visa before he could travel to the US, pick the ticket from the Lotter’s local office where it was safely kept, and visit the offices of the Oregon Lottery to claim his win.

As the NY Times and many other top publications stated, the lucky winner showed up unannounced at the lottery’s office in Salem, Oregon, holding the winning ticket and politely asking that his name not be revealed. He then informed the state officials that he had already set up a US bank account, and he would cash in his win in 20 annual instalments. The American lotteries give winners the option to choose between a lump sum and annual payments.

The unusual request made the Oregon Lottery officials get in touch with the Department of Justice and Interpol, checking out the validity of the Baghdad man’s story, his identity and the legality of his claim over the ticket. Everything checked out just fine of the lucky lottery fan.

Was the man who he said he was? Indeed, the $6.4 million jackpot winner is a 37 year old businessman living in the Iraqi capital city, who has never in his life stepped foot on US soil before. How did this guy from halfway around the world put his hands on a lottery ticket purchased in a little deli called Binky’s, on the outskirts of the American small town of Bend? He used the messenger services of the Lotter.com, a website on which you can purchase lotto tickets for the world’s biggest jackpots.

Federal law stipulate that it is not legal to sell lotto tickets across state lines, unless permitted by both states. A New Jersey cop learned this the hard way, back in 1994, when a Houston judge ruled against the legality of his purchase. Although theoretically he was the winner of a $10.5 million jackpot, it was decided he could not claim his prize from Texas Lottery.

The situation was different, though, for this lucky Iraqi as his ticket has never left the state where it was bought. It was never mailed out to Baghdad. It was kept in a safe deposit in Oregon until the claim was made. Therefore, the Oregon Justice Department and US attorney’s office in Portland decided the winner did nothing wrong! His ticket is valid. The win is his.

With the request for anonymity also accepted and the first instalment already in his bank account, the Iraqi man can enjoy his win without having to worry for his and his family’s safety!