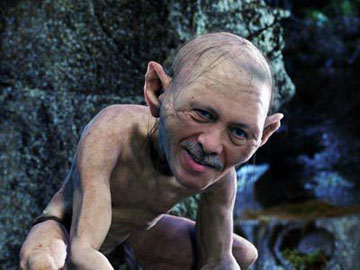 Learning to have a sense of humour is something the Turks are not known for, but it seems the President of Turkey, Erdogan, has accepted the offer from Lord of the Rings director, Peter Jackson to star in the latest film in the franchise.

“I phoned Erdo the other day and said, listen, you do it so well. Every expression you do on that face of yours is Smeagol, and when you get really greedy we get Gollum. You have to do this. C’mon my precious-s-s-s-s!”

At first Erdoğan said he would jail Jackson for such impropriety and insult, but after waving a few dollars in his face, the president took the bait like a power hungry creature from a dank dark cave.

Lord of the Rings VII will be out in cinemas next year.