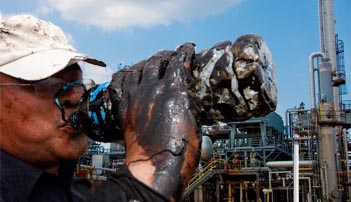 Witnesses say the OPEC chief acted like a mad man as he dipped  into the barrel and scooped up vast amounts of raw crude oil drinking it in a dazed frenzy.

“Abdul, he needs his oil fix every day, but it’s getting worse, there’s so much of the stuff he can’t get enough. He went from one barrel to the next, the oil was dripping everywhere, even over his $30,000 alligator skin shoes. I saw the look on his face, it was crazy, and he was saying things like ‘this one’s for Russia, this one’s for America, and this scoop is for the Iranians, doomed, doomed, d-o-o-o-m-ed, eheheheh!’ I’ve seen some insane things in my life but this really took the biscuit,” an eyewitness at an oil refinery told local news stations.

Next stop $30 per barrel so more goodies for Abdul.

Biden’s America: People Will Need Buckets of Trillion Dollar Coins to Buy a Loaf of Bread

If You Care About the Planet, Forget Bitcoin, Buy Burstcoin Instead