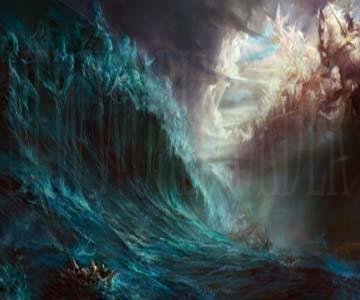 “The Christian story of Noah was purloined from the ancient Sumerians 2500 years before the Christian Bible was conceived by multiple writers. Evidence of this can be found in the eleventh tablet of the epic of Gilgamesh. Therefore as in all modern religions, these stories were simply amalgamated from Sumerian, Babylonian, Egyptian and Pagan knowledge into constructed tales for the masses as a form of control and unity in a time of turmoil during the final days of the Roman Empire. Without the constructed religions we have today, there would not be so much division in humanity throughout modern history, and to conquer the masses there must be division, so the herd can be controlled from all sides.

“One must look at Noah as a simple analogy, it just means that the herd must be culled once in awhile. As we are nearing such a time again, our true rulers will finally reveal themselves, and those who survive the cull will enter into a controlled scientific dictatorship from which they will not have any conscience of their past. History will have to be erased henceforth and populations carefully engineered so that the mess of human over population never occurs again as set forth in the Guidestones.

“Throughout history, the so-called churches have been infiltrated by those who profess their allegiance to the true light, and as high office is one element of this control, so will it be written that the set-up has been long awaited. Over the centuries, the masses have ignorantly worshipped their religions blindly and received guidance from their priests, if only they knew who was at the top of the pyramid, their ignorance would be awakened..ah, but even then they would not dare to believe with their open eyes.

“This is why the analogy of Noah is so pertinent in this time and people who go and see the Hollywoodized depiction, may one day understand what is to happen, alas it will be too late for them, as they will succumb to the ancient prophecy that was written thousands of years before the event. Those who are enlightened by the all seeing light will know what to do.

“In essence, one must reach across the universe for the truth about all knowledge, understanding and complete freedom. Those who are caught up in their limited world view, their constructed religions, and their minuscule lives will perish, for it is their greed, their abhorrence to truth, their blind devotion to fiction and their material love that will be their own undoing.

“The true Noah is a myth, a mirage, but there are varying arks and seed vaults today. They are ready now, and all necessary preparations have been made in other matters.”