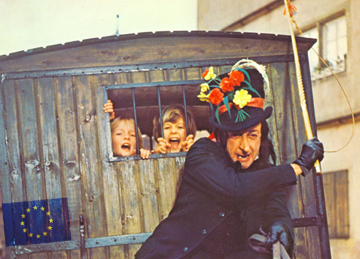 Not only will the National Health Service cease to exist after 2014, but the benefits system will have to be shut down when millions of Roma hungry for the spoils of Britain descend on the UK.

The most worrying factor in the new free roaming EU directive is the penchant for child snatching by the organised EU gangs who see the UK as easy prey.

“The Roma from Romania and Bulgaria love blond haired blue eyed white children and there will invariably be a vast increase in English kids going missing once they lay their grubby hands on our tiny over populated island. That’s why thanks to the EU, you’ll have to watch your kids 24/7 if you want to keep them. They especially love to hang around outside schools and once they take your child, that’s it, they’re just another statistic. Forget about the police, they’re unmanned and outstretched dealing with EU influx related crimes and traffic stops,” a Grimsby councillor told the BBC.

1) Don’t ever let your kids out of the house without a trusted adult supervising them at all times.

2) Drive your kids everywhere. Do not let them get on public transport at all costs however old they are.

3) Give them mobile phones and tracking devices just in case you let them out of your sight for one second.

4) Playgrounds and parks are now off limits unless really necessary and you are watching them at all times.

5) Never be late to pick your children up from school. Even if they’re teenagers.

7) Don’t let your kids play in the back garden unless supervised.

8) Children who do paper rounds are at risk from roaming EU gangs. In other words, no more paper round pocket money for your kids.

9) Install CCTV cameras around your home’s perimeter. This will also capture the crime and anti-social behaviour that will result from the massive influx.

10) Don’t vote for the Conservative or Labour party at the next election or ever again.