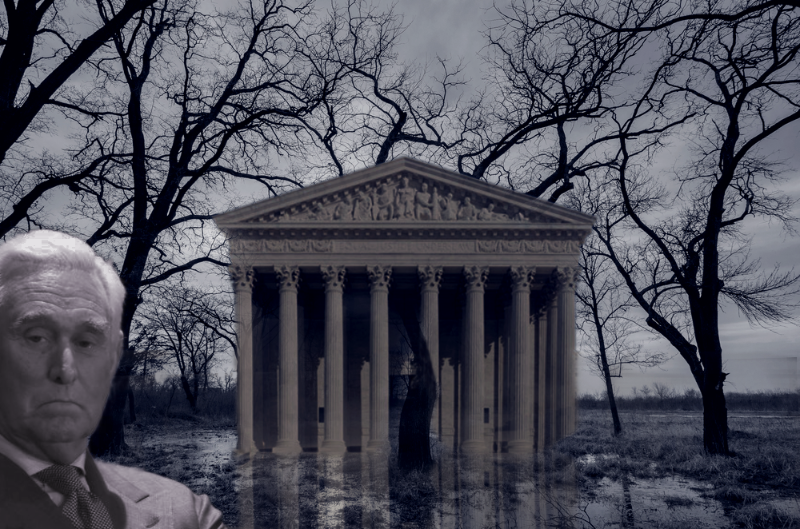 Despite a 2 year multi-million-dollar investigation, Roger Stone is not charged with Russian collusion or Wikileaks collaboration and the government has not charged Stone with having advanced knowledge of the source or content of the Wikileaks disclosures during the 2016 election including John Podesta’s e-mails. Stone is charged with witness tampering, lying to Congress and obstruction. Prior to his being subjected to a broad media gag order, Stone has vigorously contested the charges and entered a “not guilty” plea. ABC News reported that Stone passed two polygraph tests regarding his knowledge of the Wikileaks disclosures prior to his arrest.

On January 20, 2017, the New York Times reported in a page one story that Roger Stone was one of three Trump associates under surveillance by the Obama administration during the 2016 campaign. The print edition headline was “Wiretapped Data Used in Inquiry of Trump Aides”. While the Times softened the headline in their online edition, they have never retracted the story.

Stone testified voluntarily to the House Intelligence Committee the scope of whose investigation was Russian interference in the 2016 Election. In his opening statement that was released to the media, Stone asserted that he did not believe that the Democratic National Committee had been hacked by anybody and cited the forensic evidence in a study by Veteran Intelligence Professionals for Sanity (VIPS) published by the Nation magazine. Stone has insisted that all of his answers to the committee’s questions are consistent with that belief.

Despite a stunning pre-dawn raid on Roger Stone’s home in which 29 FBI agents in full SWAT gear arrested Stone while allowing CNN to film Stone being taken into custody, Judge Amy Berman Jackson has barred Stone’s defense from raising any question regarding misconduct by the FBI, the Department of Justice, the Special Counsel’s office or any member of Congress.

The FBI has refused a Freedom of Information Act request from Judicial Watch for all emails between the FBI and CNN in the days prior to Stone’s arrest. Judicial Watch has filed a lawsuit to obtain this material.

Stone’s case was assigned to Judge Amy Berman Jackson as a “related case” because the government asserted that it was connected to an earlier case brought by Special Counsel Robert Mueller charging 12 alleged Russian intelligence operatives (The Netyksho indictment) with hacking the DNC and providing data to Wikileaks. There has been no discovery in this case which is not likely to go to trial. Deputy Attorney General Rod Rosenstein said no American had violated the law or was knowingly involved in the alleged Russian hacking charged in that case.

Judge Amy Berman Jackson has barred Stone’s attorneys from raising the question of whether the DNC was hacked by the Russians and has barred Stone’s defense from putting on witnesses including former Technical Director Bill Binney to provide forensic evidence to challenge the government’s claim.

The government admitted in the discovery phase of Stone’s case that the FBI never inspected the computer servers of the Democratic National Committee and relied on redacted draft report from Crowdstrike, a third-party IT firm closely associated with Hilary Clinton’s campaign. Judge Amy Berman Jackson has barred Stone’s defense from seeing an unredacted copy of the Crowdstrike report after arguments by lawyers for the Democratic National Committee and the Democratic Congressional Campaign Committee. Both were represented by Hilary Clinton’s lawyer Mark Elias. The government was so badly stung by the revelation that they relied on the Crowdstrike report that they would file a sur reply  in Stone’s case insisting they had independent verification of the DNC hacking by Russia but have provided no evidence whatsoever of this claim.

The chief prosecutor for the Office of Special Counsel in Stone’s case was Jeannie Rhee who represented Hilary Clinton and the Clinton Foundation and gave the maximum allowable contribution to both Hilary’s 2008 and 2016 campaigns. Stone is barred from raising this conflict of interest at trial.

Stone claims that his source as to the significance and October timing of the Wikileaks disclosures is Randy Credico. Stone has released over 30 unedited and sequential text messages to prove his assertion. The government has, nonetheless, charged Stone with lying to the House Intelligence Committee regarding Credico being his source.

On February 15,2017 the Special Counsel filed documents regarding two Twitter direct messages from Stone, one to Wikileaks and the other to Guciffer 2.0. The media widely reported these disclosures as the “smoking gun” connecting Wikileaks to the Trump Campaign. In fact, Stone had supplied the text of both messages to the House Intelligence Committee as well as releasing them publicly. Both were widely covered in the media. Neither contained any evidence of collaboration or coordination by Stone.

Former Trump attorney Michael Cohen testified before Congress that he overheard a conversation between Roger Stone and candidate Donald Trump regarding the Wikileaks disclosures. Cohen has produced no corroboration of this claim. Cohen initially said the alleged phone call took place in July, only to later say the conversation took place in August of 2016. President Donald Trump has denied any such conversation with Roger Stone in his answer to his written questions submitted by the Special Counsel. Stone also denied Cohen’s claim.

Conservative author Jerry Corsi has written and said that the Office of Special Counsel threatened to indict him unless he testified that he was the link between Wikileaks and Roger Stone. Corsi refused and has denied any communication with Julian Assange or Wikileaks. Corsi has not been charged by the Special Counsel.

The Washington Times has reported that fired Trump White House Aide Steve Bannon will testify against Stone in his upcoming trial.  On August 2017 Stone wrote an article urging The President to fire Bannon. The article was picked up by the Drudge Report. 24 Hours later Bannon was fired.

It has been widely reported in the media that former Paul Manafort deputy Rick Gates will be a government witness against Stone and that prosecutors have allowed him to avoid incarceration despite having been convicted of making false statements and conspiracy, pending his testimony in Stone’s trial.

Stone will go to trial in the DC Circuit with the jury pool selected from DC residents who voted 90% for Hilary Clinton and 6% of whom are registered Republicans.