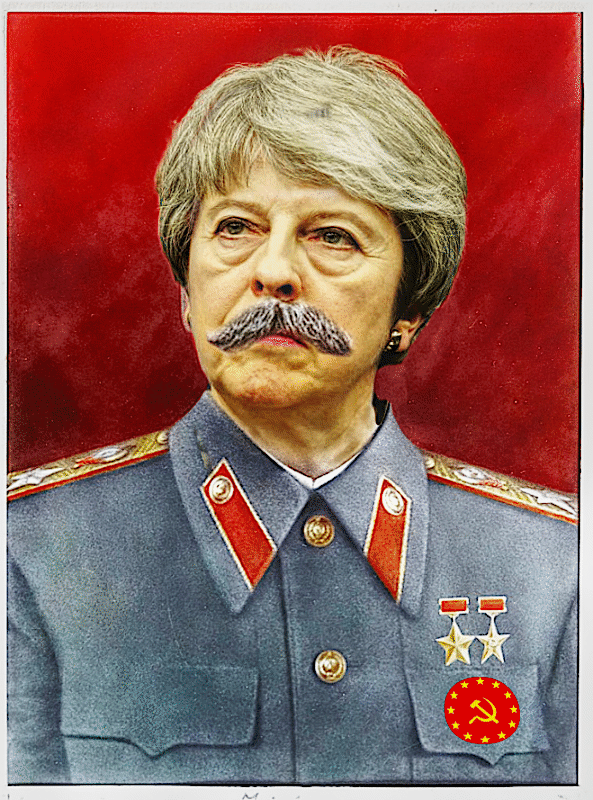 There’s nothing like a sore loser who gets all vindictive and nasty…cue outgoing PM Theresa May, a woman so afraid of her own shadow and everyone else’s, that she cowers in fear at the very thought of Trump jocularly slapping Farage on the back whilst joking about that terrible loser of a PM May amidst photographers clicking away.

“This pathetic loser is now dictating to the President of the United States of America on who he can meet when he visits Britain. Just because she was ousted from her job for being a Remainer loser and had gone rogue, she is now some kind of dictator in her last days,” one angry and disgusted parliamentarian revealed.

During his official trip to the UK, Donald Trump should be allowed to meet whoever he wants, and it is not up to some grisly stick insect former PM to dictate anything to him.

The bets are out of course, and it is possible Farage will meet with Trump, and Boris Johnson, who the president favours for the role of PM.

Socialists like Theresa May do seem to have that vindictive nasty streak to them when they lose, and Mrs May is an accustomed loser par excellence. These people just do not get it that they have lost, they cannot move on, they cannot fathom the thought of doing the honourable thing and graciously accept defeat. We have seen it in the Remainers time and time again, and even across the pond, where American socialists are still mourning the loss of the 2016 election.

Democracy does not mean if one faction loses a vote, it demands numerous other votes until that faction wins. The censorious socialists are the sorest losers of all and we have seen their dirty games played daily regarding the EU referendum result, which to this day they deny was a vote to leave the EU.

Mr. Trump, when you come to the UK, you can meet Nigel Farage. Please do not let some vindictive old hag dictate anything to you. No doubt the censors ordered by May will try to blot out any prospective meeting with Farage but fuck ’em.