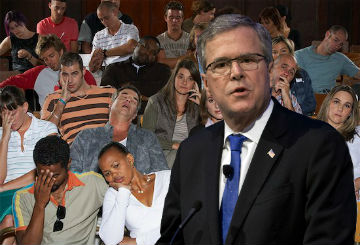 Surely the Bush clan could have come up with someone who has a modicum of charisma, maybe some character.

Certainly, Dubya was the clown of the outfit, but a devilish one at that, who happily revelled in destruction, gleefully causing the deaths of millions of Arabs. Jeb, on the other hand has absolutely nothing going for him apart from being very, very boring.

“Jeb, what can I say, this guy should have been a proctologist because he’s so butt boring. He speaks in a monotone robot voice, has no character or oratory skill. This guy is so fucking boring people shoot themselves during his speeches. Maybe we need to up the ante a little, electroshock therapy is recommended,” Jeb Bush’s campaign manager, Dwight Lousehymey, told reporters after another Jeb speech.

In Maryland last month, two people shot themselves in the head after a three hour Jeb speech, four people strangled themselves and a wayward cat spontaneously combusted on the decks causing many to wake up from deep sleep.

During a mid campaign stop in July in Arizona, a Jeb rally had to be halted when someone yelled they could not take any more before jumping from a car park roof .

Wherever Jeb goes he leaves a trail of destruction, much like his brother.

“Actually, you know they say Jeb is boring, but this is why he would make a good president. He bores people to tears, till they have no will to live, they sign anything to get away. Can you imagine what he could do to some world leaders, they would be begging to surrender. Jeb is the secret weapon the US has been looking for for a long time,” CIA Director, Barnes McNamara told Fox News.

Thousands of doctors are now sending patients with acute insomnia to Jeb Bush rallies across the country.

“I have one lady, she hasn’t had a good night’s sleep in years. I gave her a piece of paper with the address for the next Jeb Bush rally. She slept like a baby. She called me the next day and said it was the best sleep she ever had in her life, and now uses recordings of Jeb Bush as a sleep aid,” Dr. Jim Timpson, from Milwaukee revealed.