Mohammed Aqbar is waging Jihad on Jihad itself. He does not carry placards denouncing every other religion under the sun anymore or wishing ill on all the world but instead carries a message of peace and love.

This is Jihad on Jihad, a new movement that is taking the Muslim world by storm.

From Mecca to London there have been protests against the violent militant Islamist doctrine of violence and ugly rhetoric. Instead, the Islamists are now embracing peace and love to all mankind.

“I used to spit on anything Western. Now I embrace them as my brothers and sisters. We are all humans and bleed the same blood.” exclaims Jamia Muammar the spokesman and Imam of the Juala Mosque in Qatar.

In Jerusalem, a city renowned for its deathly divide of Muslim and Jew, there have been celebrations in the streets and Rabbi’s have been seen walking with Imam’s hand in hand in the narrow streets. A feeling of goodwill to all men has been felt throughout the war torn city.

Instead of beheadings in Iraq now there are blessings and foot baths to show love to foreigners. “I welcome all foreigners who wish to do business in my country and instead of beheading you I anoint you with love and tea.” says Sheikh Mahmoud bin Saleh al-Haidari Rafsanjani. 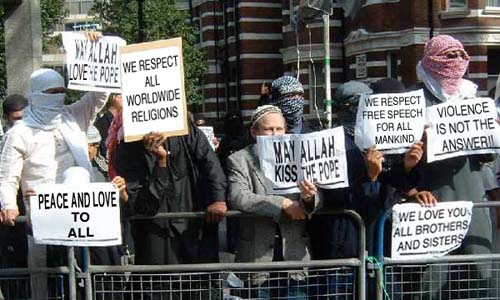 Meanwhile, in London where there used to be a big militant Islamic contingent there has been a massive movement towards Jihad on Jihad.

Trafalgar Square and Whitethall were filled with over 50,000 Muslims waging Jihad on Jihad on Tuesday.

“We came here today to love all, Christians, Jews, Buddhists, Hindus and all religions around the globe.” said Mohammed Bakri Ali Qats leader of the ‘Brigades for Love and Peace’ group to cheers and confetti throwing Muslims. 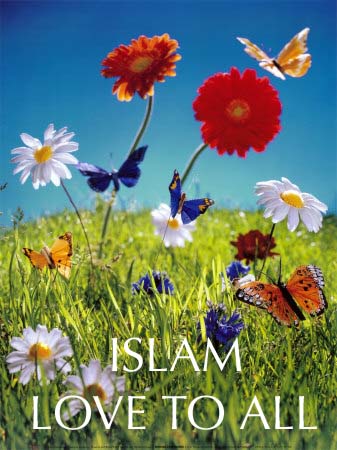