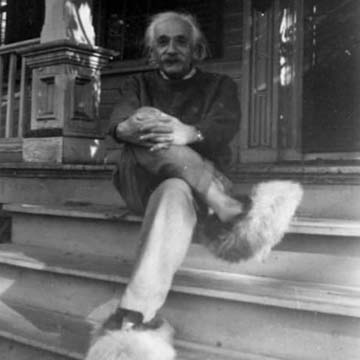 “I was thumbing through some old things in the room, when I came across an old shoe box, it was covered in a thick layer of dust, possibly from 1937. This new find is truly astounding and will revolutionise astro-physics forever,” the professor revealed.

It may have been in 1905 that Albert Einstein determined that the laws of physics are the same for all non-accelerating observers, and that the speed of light in a vacuum was independent of the motion of all observers but he left out one key element, one which general or special relativity does not include — fuzzy relativity.

Einstein spent 23 years perfecting the theory of fuzzy relativity and his ultimate creation was a pair of fuzzy shoes to illustrate his theorem.

The fuzz of gravity

Two objects exert a force of attraction on one another known as “gravity” but “fuzzy gravity” exerts a force no equal to any sum of total gravitational pulls as a pair of fuzzy slippers on a man’s foot, therefore by wearing fuzzy slippers, the wearer transmutes the external force towards non-linear spatial planes simultaneously transforming into a multi-dimensional continuum known as space-fuzz-time.

The document in the shoe box also outlines theorems which could revolutionise how we view time as a whole, with fuzzy time, there is no speed of light in the universe, there is simply fuzzy vortex time, where time expands and contracts into nothingness whilst maintaining equilibrium within a linear fuzzy tesseract string.

“He got the ideas by simply wearing fuzzy slippers. The strands of hair on a fuzzy slipper are strings of time, alternate universes all expanding and contracting in infinite dimensions. The universe is all time minus no time, therefore the question is what is outside the universe? Einstein reveals that gravitational fuzzshift occurs and universes fold inside and outward of each other, like a folding onion with fuzzy strands. What is outside the universe and its many layers is actually inside the universe and could easily fit into a sub-atomic particle. I had to initially question this, because Einstein is saying that the whole universe can fit into something that tiny is insane, but after following the theory through I really saw what he was saying. We are truly amazed,” professor McCormack explained.

Einstein’s theory of fuzzy slippers exhibition will be held at Princeton university in June 2015.