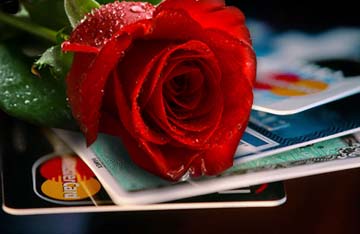 As if it wasn’t hard enough for men already, a new national survey has revealed that millions of women are getting credit reports on prospective partners.

Mavis Longleat, a dating consultant is not surprised in the least.

“The main focus is on how much cash the man is capable of spending on you before you let him into the pearly palace. Especially on Valentine’s Day, a man has to prove that he has the right credit. If he doesn’t splash the cash, dinners, shopping and gifts, move on to the next one. It costs a man about £200 to get a woman into bed, but you can milk that for longer by leading the poor bastard along even further. ”

What’s on the top of the list this Valentine’s Day? The survey revealed that credit card gifts from men with high spending limits was desired most. A single rose or a poem, maybe a tentative kiss was nowhere to be seen.

1) Barclays Premier Card with money back points will put a big smile on her face, especially when she walks into the hand bag shop

3) Egg credit card, a bit like the egg on a man’s face when he sees the f*cking bill after being dumped because the credit limit was hit

4) Tesco credit card, the lucky lady will get points every time she uses it but the man gets no points, he might get a shag after the third or fourth date, only after she’s cleaned out his account completely

5) American Express, for that special Valentine’s experience. Give one of these to a girl and you’ll be in like Flynn