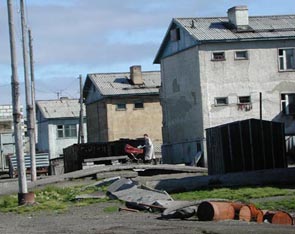 Senior members of Comrade Brown’s government politburo office in Whitehall have disclosed crucial data about the further destruction of the British system of wealth so as to enable complete Sovietization.

Speaking from Whitehall’s politburo offices, senior analyst, Comrade O’Brien, revealed the extent of Gordon Brown’s war on the proletariat and bourgeois classes: “Our supreme unelected commander in chief, the one-eyed supreme eyeball and seer of all, the unchallenged visionary of the New Era of Change and saviour of the World’s Soviet Global Control Systema, has once again excelled in his plan to reduce the wealth of the people further and bring them to their knees. The people of Britain will be reduced to eating from rubbish bins and living in cardboard eco-boxes thanks to our Sovietization collectivist dream. Comrade Brown, who is responsible for the biggest economic downturn the world has ever seen, is having so much fun with the destruction of the British capitalist economy that he now has uncontrollable giggling fits when at his desk signing 42 year detention warrants. We must congratulate him on his efficient technique in destroying peoples lives and spreading more misery around than Stalin or Lenin could ever have wished. The holocaust that will come will dwarf their regimes and make them look like Mickey f*cking mouse.”

Capitalist houseprices have already fallen 21 per cent from their peak, but further Sovietization should ensure they will slump further by up to 55 per cent if the over-correction in prices is as bad as in the early 1990s, according to the Central Politburo Office.

That would leave 60 million Britons in negative equity – when their house is worth less than their mortgage.

This will enable more repossessions by the Soviet banking system led by Northern Red Rock and the Lloyds Bolshevik Bank, so that the state will rightly own everything.

“There will be no self-ownership under Labour’s Soviet Britain. We will have an equal society where everyone will live in poverty and misery and where personal wealth will be a thing of the past. The capitalist scum who do not obey the new system will be taken away and re-educated in one of comrade Brown’s eco-gulags,” Comrade O’Brien added.