Located in the North Atlantic Ocean between mainland Europe and Greenland. It is the least populous of the Nordic countries and the second smallest; it has a population of about 320,000 and a total area of 103,000 km².

The internet auction will not include Iceland’s greatest export, Bjork but will include lots of volcanoes, glaciers, penguins and some people with some very interesting names like SigurÃ°ur BreiÃ°fjörÃ° (pronounced similar to the sound of coughing up phlegm).

The Icelandic economy is totally bankrupted but you can find solace in the fact that the local cuisine of delicacies like cured ram’s scrota (skyr) and barbecued sheep heads will be there to keep you warm in this f*cking freezing penniless wasteland of an island.

The eBay auction was put up by Ólafur Ragnar Grímsson who is the current president of Iceland.

“Atleast if we get a few thousand dollars for our whole island we will be happy. We can even make the person who buys our country ruler, king or emperor. Whatever title you want. Last year we were proclaimed as the most developed country in the world by the United Nations’ Human Development Index, today in 2008 we rank below Zimbabwe and therefore our eBay price is reflected in this fall from grace.” 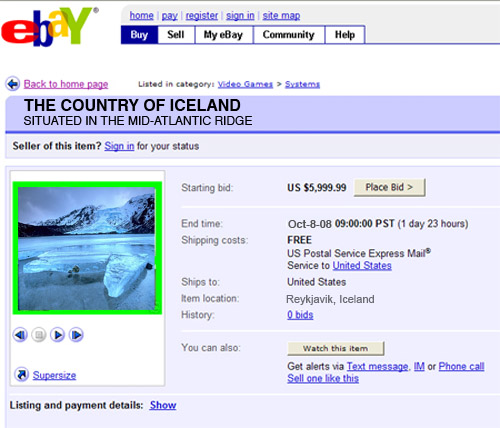 Already there has been a huge interest in the eBay auction and many thousands of people are flocking to the internet auction house to take a peek and maybe add on a few pennies to the bid price.

The latest from the auction shows the current price to purchase Iceland at $12,675.