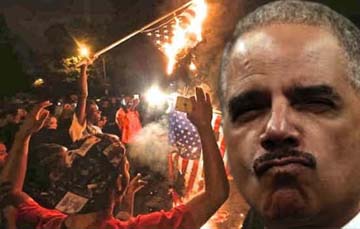 Holder was speaking at the world famous Ebeneezer Goode Baptist church, when a little man came up onto the podium and told him he had been fired and put on the Homeland Security watch list.

“Today I was fired for inciting violence!” Holder told the gathered audience. The attorney general then went on to say “You know what y’all gotta do? Let’s burn this mufugga down”.

“We will continue to loot, be violent, disrupt and burn down businesses because a cop shot a thug,” Holder said to applause.

The resulting cheers and shouts in the church left Mr. Eric Holder standing silently at the podium for almost twenty three minutes. Uniformed security officers walked up an aisle to escort the former attorney general out of the church and into a waiting police car where he was driven away.