“This summer we’re going to be seeing some major bingo wings on the babe celebrity circuit, and I have travelled all the way from Los Angeles to the British city of Burnley to see this wonderful phenomenon that everyone is talking about,” Mr Lensley told the Daily Mail.

Mr Lensley travelled to Burnley, Lancashire, to study how some of the British women cultivate their beautiful bingo wings.

“They have to swing and blow in the wind. I was in a bingo hall in Burnley and I saw two women fighting over the third prize; their bingo wings were literally flapping and swaying so far that they were using them to smack each other in the face. It was an awesome sight, I just sat down awestruck at the beauty of it, watching those two bingo winged mammoths slapping away like that. I even brought up a little bit of sick into my mouth,” Lensley recalled. 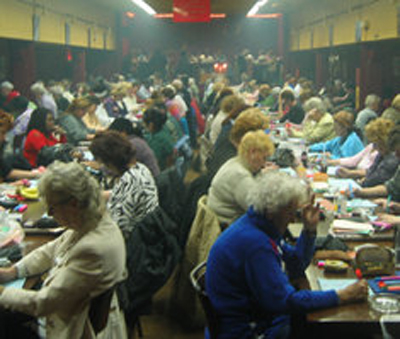 After studying the bingo winged ladies from Burnley’s numerous bingo halls, Lensley travelled to Blackburn but was brutally attacked during a mad bingo session at a dilapidated hall.

“I was just admiring one of the ladies assembled at a table, and could not resist grabbing her left bingo wing. It was at that moment I received two black eyes, a broken collar bone and one of my balls was nearly pulled off the bloomin’ socket.”

Mr Lensley plans to bring the joy of bingo wings to the women of California.

“Forget about Baywatch bodies, once you get a hold of a bingo wing when you’re playing bingo, there is no fookin’ going back. It’s part of the rapture of bingo itself. You can flick ’em, lick ’em and grab ’em. I love it. I’m addicted to women with bingo wings, and I want our Californian women to embrace this beautiful practice of growing these glorious hanging meat baskets of joy.”

– Bingo Wings are cultivated after many years of careful non-exercise, smoking loads of fags, doner kebabs, plenty of booze and a dedication to playing bingo in sweaty, dingy bingo halls for hours on end.

– Mavis Talbot, 44, from Blackpool was crowned Mrs Bingo Wings in 2010 after a protracted contest that lasted for two weeks. She still holds the Bingo Wing cup in her trophy cabinet and is preparing for this year’s heated competition.

– Some women have even tried to fly with their bingo wings. Janice Herbert, 65, from Macclesfield, attempted to fly three metres across a pub car park in 2009 from a standing height of six feet watched by Guinness World of Records officials. She sadly suffered multiple fractures after a limited takeoff caused by her tripping on one of her sagging bingo wings and plummeting to earth in a crumpled meat curtain mess.

– TV presenter, Anne Robinson, once tortured a Weakest Link contestant live on air for giving the wrong answer to a piss-easy question by dangling her bingo wing in their mouth for thirty two seconds.