The pickled shark will be extracted from its tank of seclusion and finally released back into the sea from whence it originally came.

The spectacular release will be filmed for a Channel 4 retrospective program about the artist’s work.

“It’s the final journey for the shark. I will miss it as it swims gently into the horizon and sinks under the water forever. My studio has fitted a mechanical device into the shark which will make this seemingly impossible feat possible,” Mr Hirst said.

Bathers on the Blackpool seafront have already been warned by the coast guard that the shark will be swimming in the area and they should not be alarmed if they see it.

According to art world pundits, Charles Saatchi, who commissioned the piece in the first place, will be the one on the sea shore who will press the all important release button.

“When we release the shark, I will have a huge tear well up in my eyeball. It will run down my cheek and land on the rocks below me. I will be sad, yet relieved for the shark. It will go to a place where it will be away from the prying eyes of the crowds. It will finally be able to go home,” Mr Saatchi said.

There are also plans to release the Hirst cow that was sawn in half into a deserted field next year. 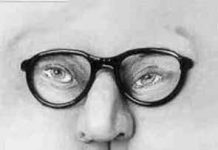